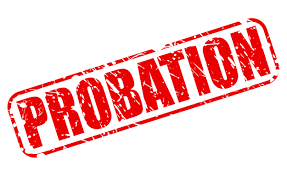 Probation in criminal law (not to be confused with probation at the workplace) is a period during which an offender is put under supervision. Referred to as a probation order, it is issued by the court and supervised by a probation officer (not the same as a police officer).

When probation is imposed

If an offender’s sentence is suspended or they are conditionally discharged, they are always given a probation order to ensure they live up to their end of the deal.

A probation order is sometimes supplemented with a fine, a conditional sentence, intermittent imprisonment or imprisonment for less than two years. Though the maximum time one can be on probation is three years, a typical probation period lasts one or two years.

Conditional discharge
This is when an offender is found guilty of a crime but is not convicted. They are instead let go on condition that comply with or adhere to the terms in their probation order. However, if the offender is found guilty of another offence during this time, the court may revoke their probation and sentence the individual to whatever punishment that would have been imposed at the time of their first offence.

Suspended sentence
In this case, the individual’s conviction is recorded but the sentence is not passed. Like for a conditional discharge, the court may revoke the probation order and impose a prison sentence.

Intermittent imprisonment
This sentence usually lasts 90 days or less. In some cases, the court may order that it be served at irregular intervals like on the weekends – hence the name intermittent imprisonment. This sentence is usually accompanied with a probation order to cater for the times that the probationer is out free and a flight risk. Another probation order may be made in case the sentence needs to be followed up with further probation.

Features of a probation order
• The order cannot be in force for more than three years
• Two orders cannot run consecutively (unless the offender has a couple of different orders imposed on them at the same time)
• They run till the expiry date unless the court lets the individual off probation early. The court may also reduce the length of probation order at any point in time.

There are conditions that are contained in every probation order. They include:
• Maintain peace and good behavior
• Always heed orders to appear in court
• Inform the court or probation officer of changes in names, address or job

Other conditions may include:
• regularly reporting to a probation officer
• not using or having drugs that are not clinically prescribed in your possession
• not purchasing, carrying or consuming alcohol
• getting counseling or rehabilitation
• performing community service
• staying from certain individuals